My trip to Malacca – An Awesome place to visit

“Visiting Malacca means visiting Malaysia”- is a common saying in Malaysia and is true in every sense. Imbibing the rich cultural heritage and colonial history, Malacca still holds the ancient Peranakan culture. Traces can be still observed of the connections made by the colonial forces with Malaysia through numerous forts, ancient monuments, landscapes and museums.

As stockpiling antiques and handicrafts was my hobby and history always intrigued me, Malacca was on top of my bucket list. As the state has numerous historical places and museums to visit, it was important to choose the ones were on a priority basis as it was not possible to visit them all on a 7-day trip. Choosing the right transportation is also essential for every vacation as the budget, schedule and convenience must be kept in mind. The most convenient transportation was a bus from Singapore to Malacca. I chose redBus as it offered numerous options and the rates were far more affordable.

Here’s a list of the top 5 places that intrigued me during my visit to Malacca, which you can choose from with a bus from Singapore to Malacca.

Located near Malacca China Town centre, the Christ Church stand as a memorial build in 1753 to celebrate the 100th year of Dutch occupation. This gorgeous brick-red church boasts centuries-old handmade pews, memorials commemorating the Dutch and local soldiers, decorative lights, fans and other antiques. After the British captured Malacca, they added a weathercock and a bell to it.

Situated near the Christ Church, is the oldest standing Dutch building, The Stadthuys which once served to be the residence of Dutch officers. Built in the year 1641, this building was the centre of all official government activities till 1841 after which it was turned into a museum.

Considered by many to be Malacca’s best-visiting spot, the A’Famosa Fort was built in the year 1511 by Alfonso de Albuquerque. One of the ancient surviving European pieces of architecture, it can be easily visited by a bus from Singapore to Malacca.

Build as the exact replica of the 15th-century palace of Sultan Mansoor Shah, the Sultanate Palace is a three-storeyed museum divided into eight chambers. The museum is painstakingly marvellous and has numerous antiques, artefacts and detailed paintings depicting the rich history of the state.

If exploring the historical places of Malacca becomes a bit boring, you can take a break and visit the Malacca Butterfly and Reptile Sanctuary. It is the home to numerous butterfly species, hedgehogs, snakes, lizards and fishes. It is located about 15 km north-west of the main city and can be visited by a bus from Singapore to Malacca.

There are numerous other historical places that you can visit during your stay in Malacca. You can go antique shopping and museum hopping or relish the exquisite local delicacies. However, make sure to choose a transport that works best with your itinerary. redBus gives a wide array of options of bus from Singapore to Malacca partnered with the best service providers. Plan your trip to Malacca now! 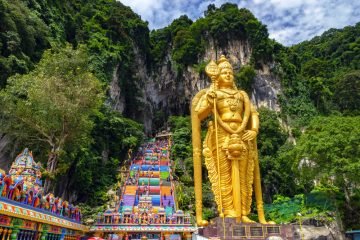